Meditation on the Refuge

In the palace of great bliss on the top of my head,
If you are, my kind root-Lama, I pray to you.
Precious, grant me your blessing,
So that I recognize my own true nature as a Buddha.

Below the navel to the crown, this part of your body is more open and shining. Be aware that this is like a being of light. (45 Sek)

When meditating on taking refuge, it is important to be in the right meditation posture.

Transform the place where you are from its ordinary aspect, for example, the rocks and stones of a cave, into a beautiful and colorful land of pure gold and decorated with turquoise. The soil is porous, not heavy, with uplifting flexibility. Surrounded by beautiful auspicious trees, there is a river of nectar and there are seven treasures, eight lucky symbols and other beautiful materials and environments. In the middle of the sky are white clouds, like huge cushions. 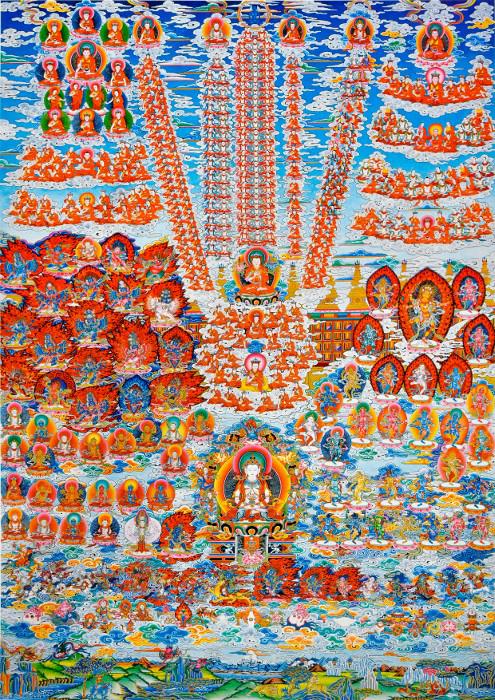 On these pillows of clouds is a jeweled throne with a sun and moon pillow. On this sun and moon pillow sits our Root Lama, who embodies all the qualities of all the enlightened beings of the three times, such as compassion, wisdom, and love. Our Root Lama, in the form of the Enlightened Compassion, Shen Lha Ökar, is facing us, all the lineages extending, like a chain of golden prayer beads, straight above his head to the Originally Enlightened Kuntu Zangpo.

On the right side of Shen Lha Ökar are flames of fire and gusts of wind. The entourage of the peaceful and wrathful deities stands in these flames and gusts. They carry ornaments made of bone. Every deity holds weapons. They are in wrathful postures. Before and behind these deities are the 1,002 Enlightened, dressed in monk's robes. They are all perfected with the 32 most important signs and 81 exemplary signs of the Enlightened One. They are all sitting cross-legged in the meditation position. They emit boundless light and rays and are surrounded by a circular rainbow.

Above and behind them is Tönpa Shenrab, surrounded by his eight great sons and the great masters of the three vehicles. Their bodies are white and they are dressed in cowls. Everyone holds a staff, crowned with a Stupa, in his right hand and a begging bowl in his left hand. They stand over each other, but without touching.

Behind Shen Lha Ökar is the throne of eternal Yungdrung. Positioned on this throne are the three highest objects that symbolize the body, mind and speech of the enlightened ones.

A statue and a Thangka the size of a mountain symbolize the body.

All the texts of the teachings, wrapped in cloths with their labels facing us, make the sounds of «Ali» and «Kali». These symbolize the speech.

There are 1,002 Stupas that are as bright as light, reflected from a snowy mountain. These symbolize the mind.

Above and behind is Yum Chenmo Satrik Ersang, Sherab Chamma, which is the great wisdom mother. She is the highest of the twenty-one loving mothers. She carries the thirteen peaceful ornaments and is surrounded by her retinue.

Then, under and in front of Shen Lha Ökar, in the area of flames and wind, is Yeshe Walmo, the highest protector of the Bön teachings. The other protectors of the Bön teachings surround her. All of them have a face behind, which represents the removal of all obstacles to practice. We remember that all these protectors are here to protect and support us in our practice.

All of our visualizations ꟷ the four highest objects of refuge, the deities, the Khandros, and the protectors ꟷ are clear and exact, but have no material form, like an image in a mirror. They exist but cannot be grasped, like the reflection of the moon on the water. They all appear simultaneously, but they are separate, just as a rainbow is made up of separate colors. All are happy smiling in bright and colorful manifestations. We notice that they all appear with the appropriate qualities of compassion, power, blessings, and omniscience.

Now imagine that all sentient beings on earth are before the highest objects of refuge. We visualize both a person we are testing to see if he is our enemy and the lower beings that cause illness, trouble or other obstacles, in front of us. On our right side, we visualize our father from this life. On the left side, we visualize our mother from this life. Then we visualize all the sentient beings of the six areas around us in the form of people as gathered at a festival. They all hold their hands together with their palms in front of their hearts.

We believe that for all sentient beings, including ourselves, from today until we reach enlightenment, the Lama (the Teacher) and the Three Jewels are the ones to whom we take refuge, whom we consider to be our supporters. We think we say: «We rely on you; we have no one but you to whom we can take refuge. So, the joy or suffering of our lives and the guidance of our future path to enlightenment, these we entrust to you, our true protectors. Whether we are liberated or remain in this cyclical world is in your wisdom».

We create this visualization as if we were really doing those actions.

We do not separate the counting of the preliminaries of preparatory practice, as described above, from the visualization that we have generated by reciting the prayer. We renew our thoughts of taking refuge and recite the following prayer:

DÜ SUM DER SHEK DRO WA YON KYI GÖN
All the enlightened of the three times are the liberators of the sentient beings,

KU ZUG SHAL KYIN DU DUNG SUNG RAB TEN
The three gates of body, mind and speech are the reliable source of the bliss of the enlightened,

CHOG CHÜ SHE RAB THAR LAM TÖN PI DON
The great spiritual warriors of the ten directions are the lights on the path of enlightenment,

As we recite this prayer, it is important that we are aware and attentive to the meaning.

Stop this recording for the time of recitation.

The rays of light from the hearts of the four highest objects of Refuge are reflected to all sentient beings, cleansing all unclean deeds, obstacles and negative karmic traces. Then all the sentient beings suddenly dissolve into the four highest objects, just as every hundred birds fly when you throw a pebble to one of them. Gradually, all four of the highest objects are converted into light and dissolve into the central Lama. The royal lineage holders above the Lama's head dissolve into the Lama, beginning with the highest, continuing to the lowest. Then the body of the Lama becomes smaller and moves to our crown chakra. We unite the mind of the Lama and our own mind into one mind. We imagine that through this union, our mind has the same triple mind of wisdom as the mind of our Lama. Its essence is the contemplation of this state of mind without changing our mind, but relaxed in its own state without grasping and without being deceived. In fact, this is the absolute perfected precious mind and the ultimate object of refuge.

When we finish our meditation on the creation of the mind of enlightenment, it is important that we all dedicate to all sentient beings, with the claim that they are liberated from this cyclical world, by reciting the following dedication prayer: