While practicing confessing for the purification of sins or negative Karma, the purpose of the practice of Mandala Offerings is to collect merit or positive Karma. There are two considerations here, that is, you offer the Mandala or that what it is. The Mandala, which is a representation of the whole world with all its wealth and abundance, is given to all enlightened beings. This is not done in their favor because they lack nothing, but this is for our own benefit, because one has a lack of accumulation of merit, and acts of generosity are the best means to produce meritorious Karma.

First, there is the Mandala, which is like the heavenly palace of the gods, and that is what the practitioner in heaven visualizes, as you did before with the tree of assembly. The presence of this celestial palace is invoked with the sounding of the seed syllable DRUM, which is based on the five consecutive elements, starting with the space element at the bottom, and going up to the earth element. This Mandala of enlightened beings is the pure dimension that is a field of merit. A more detailed description of this tree has been given above.

Second, there is the Mandala, which is offered to the Buddhas and the assembly of Bodhisattvas who are the objects of refuge.

This Mandala has four different levels of meanings:

1. The Outer Mandala: This mandala is a symbolic representation of the outer world and all the riches it contains. See below.

2. The Inner Mandala: This is the symbolic offering of one's own physical body, known as Ganachakra Puja or Tantra festival, as in the subsequent practice of the Chöd.

3. The Secret Mandala: This is the offering of one's thoughts and emotions, including the 84,000 Upadeshas, or the lesser emotional impurities based on ignorance, which in the infinite state of mind's nature in the 84,000 types of knowledge or in the original knowledgements are transformed.

4. The Most Secret Mandala: this is the self-created Mandala of Dzogchen. That is, the realization of it and staying in an unchanged state, without distraction, so that no disturbances arise from discursive thoughts or feelings. In this way, all of this becomes part of the total offering to your own natural state.

With regard to the Outer Mandala, there are two basic ways to make the offerings. First you make the Mandala Mudra with your own two hands and recite the Mantras. In this Mudra the two ring fingers are pressed back to back and they represent the Mount Meru in the middle of the world. The tips of the other fingers grip each other and these mean the four continents, while the circles made with the thumbs represent the sun and the moon. The shells formed by the palms are the oceans. 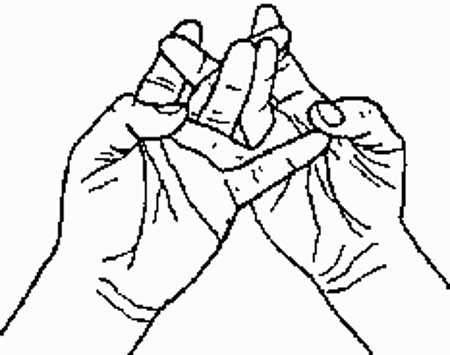 The other, more elaborated method, which is right for the Ngöndro, uses a silver plate with three silver rings progressively filled with rice and other valuable objects. These rings are piled one over the other. The parts of the Mandala are designed to have the right dimensions, shape and material, and the decorations and ornaments are placed on top of them. 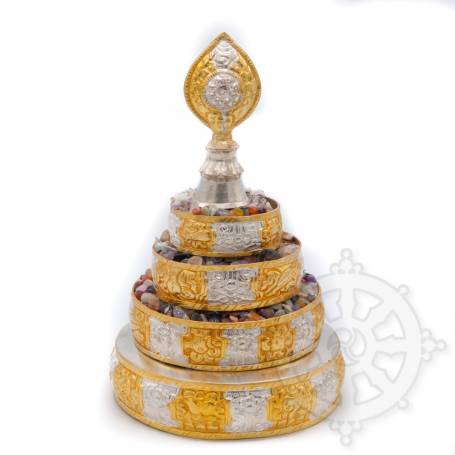 The creation of the world is represented by this round metal plate and the three rings placed on top of it. These rings are gradually filled with rice and stacked on top of each other. They signify the three thousand-fold universe, that is, a universe of 1000 x 1000 x 1000 world systems inhabited by intelligent beings that Buddhas can manifest. The first ring represents the first thousand worlds, the second ring the second thousand, and so on. To each of these worlds with all their wealth and treasures belong Devas, Nagas and humans. All of this is offered to the gurus and other objects of refuge, visualized in the sky.

One takes the five-fold attitude of Meditation and performs the nine breaths as usual. With regard to this practice there are two phases:

We hold our right hand in the Samadhi Mudra, which means the duality of space and awareness. With the left hand than we hold the Mandala. As we rub and clean the surface of the silver plate with the palm of the right hand, we should think that we cleanse all the negative karmic traces and veils of ourselves and others.

The meaning of this Mantra in the language of Zhang-Zhung is broadly as follows: «We worship and purify in mind, wipe away all our defilements so that everything becomes clear and pure».

The function of this Mantra is to clarify and clean the surface of the Mandala disk. This Mantra is recited each time, that is, nine times in total. Then, the plate still in the left hand, one arranges while reciting the Mantra

with the right hand in the middle a large pile of rice grains.

The function of this Mantra is to establish itself around the center. The pile in the middle means the Mount Meru.

Further, starting from the front, which represents the eastern direction and going to the left, counterclockwise, one arranges while reciting the Mantra

in the four cardinal directions and in the eight intermediate directions, the twelve smaller piles of rice, which signify the twelve continents.

Roughly speaking, the meaning of this Mantra is: «The element of space (A), air (YANG), fire (RAM), water (MANG), earth (KHANG) and the heavenly palace itself (DRUM) ‒ We wipe our mind clear and clean, we destroy our obscurations!»

The function of this Mantra is to establish the four major continents and the eight smaller continents of this world system. The preceding syllables are for the five elements space, air, fire, water and earth. These five consecutive elements form the foundation of the material world. During the recitation of the Mantra

one arranges the rice grains as delivery substances in the four directions around the center like the petals of a flower.

The meaning of this Mantra is: «And our thoughts become clear and clean as a flower!» The Mandala, the pure vision in the mind, is like a flower offered to the enlightened one.

The function of this Mantra is to establish the sun and the moon, as well as the eight auspicious signs and so on. All in all, the seventeen piles of rice represent Mount Meru, the twelve continents and the four elements. You insert the rice into each ring, placing one ring on top of the other, until each ring is filled. All the time you do this, you should be aware that this Mandala represents both the whole world with all its prosperity and wealth from the Devas, the Nagas and humans, as well as contains the eight symbols of happiness and the seven emblems of a Kingship.

➳ The first group consists of the umbrella, the golden fish, the treasure vase, the lotus, the shell, the endless knot, the victory banner and the wheel.

➳ The second group consists of the wheel, the jewel, the queen, the minister, the elephant, the horse and the general.

Then, if the Mandala actually presents as a silver plate with the rings, hold the Mandala a little bit up with your left hand and flick the fingers of your right hand at the end of each recitation. This is the sign of the updating of the offering.

Not only do you represent only, but at the same time, all other living beings also offer the gurus and the three jewels of Mandala. All these forms are radiations of ourselves. All together make the offering as a single group, the collectivity of all beings, to the Buddhas and the Bodhisattvas. The purpose of this Mandala is to accumulate meritorious Karma.

You offer them everything that is valuable in the world. Although you may not have the ability to do so in reality, this intent is still in the mind of the practitioner. The practice of generosity is the best method of accumulating merit. Moreover, through this practice of offering one overcomes one's own attachments to possessions. Normally, if you offer something of your own property, you are expected to pay something in return. This is an impure offering, because the intention is unclean. It's the same as with old and rancid butter for lamps on the altar in the temple because the butter is no longer edible. One thinks that if people can no longer eat the butter, then they can still be offered to the Buddhas. But the Buddhas cannot be so easily tricked or fooled.

Therefore, one must make the Mandala offering with a pure intention. You offer everything that is clean and of the highest quality in this world. But one should give it away freely; keep nothing, in no way attached to what is offered. The practice of confession is necessary for the purification of veils, and the Mandala Offering is appropriate for the purpose of accumulating meritorious Karma. This preparation of confession and offering transforms the practitioner into a suitable vessel for receiving pure wisdom from the teachings.

Before you fill nectar into it, the vase must be clarified and cleaned; otherwise the impurities in it would contaminate the nectar and spoil it. The offerings can actually be made or simply visualized in the mind, whichever is appropriate, because only our purpose really counts here. So you should bring everything you have in the world without attachment.

The visualization of the objects of refuge has been described above.

For this purpose, the following offering prayer can be used:

OM NA MA A KAR SHA YA NI SHAK SA LE SANG NGE YE SO HA
We pay homage and cleanse in mind, wipe away all our defilements, so that everything becomes clear and pure.

DRUM RI TI GAR MA LA HO
We make this heavenly palace as big and beautiful as the king of the mountains self!

A YANG RAM MANG KHANG DRUM SHAK SA LE SAN NGE SO HA
The element of the space (A), the air (YANG), the fire (RAM), the water (MANG), the earth (KHANG) and the heavenly palace itself (DRUM) ‒ We wipe our mind clear and clean, we destroy our obscurations!

Emaho! At the beginning of the founding of the five elements, Mount Meru and the seven golden mountains are built,
The four major and eight smaller continents, along with all the beautiful outer and inner qualities for the senses they contain,
And adorned with the sun and the moon: these hundreds of millions of world systems,
Presented by our mind, we perform, please accept them!

It should be noted that all of these Mantras, as given in the Confessional formula, are presented in the language of Zhang-Zhung and not in the Sanskrit language of India. However, the seed syllables or Bijamantras for evoking the five elements and the heavenly palace are the same as in Sanskrit, with the last syllable being DRUM ist. E MA HO means «How wonderful!»

The meaning of the last mantras is:
OM A DA DA DE DE ꟷ Our mind become as clear and as clean as a flower!

In the next Mantra, the sound of the invocation SWO Nampar Gyalwa (or Tönpa Shenrab). MU points at the Dharmakaya, YE to the Sambhogakaya and TRO to the Nirmanakaya. The remaining syllables represent the associated deities in the entourage.

The concluding Mantra literally means: «Clear! Radiant! Immeasurable Light!» But RAM SWAHA has the meaning: «May we receive the sending of your wisdom!» The function of this final Mantra is for the destruction or dissolution of the Mandala.

Having summoned forth an infinity of offerings desired or needed by the living beings, one is praying that the mind stream will produced a special experience and understanding of the Natural Condition and Mahayana. By reciting these words one makes the Offerings and the obligations.

This practice of presenting one's own physical body as a Mandala is similar to the described Chöd practice.